My Take On Visiting Walt Disney World During A Pandemic 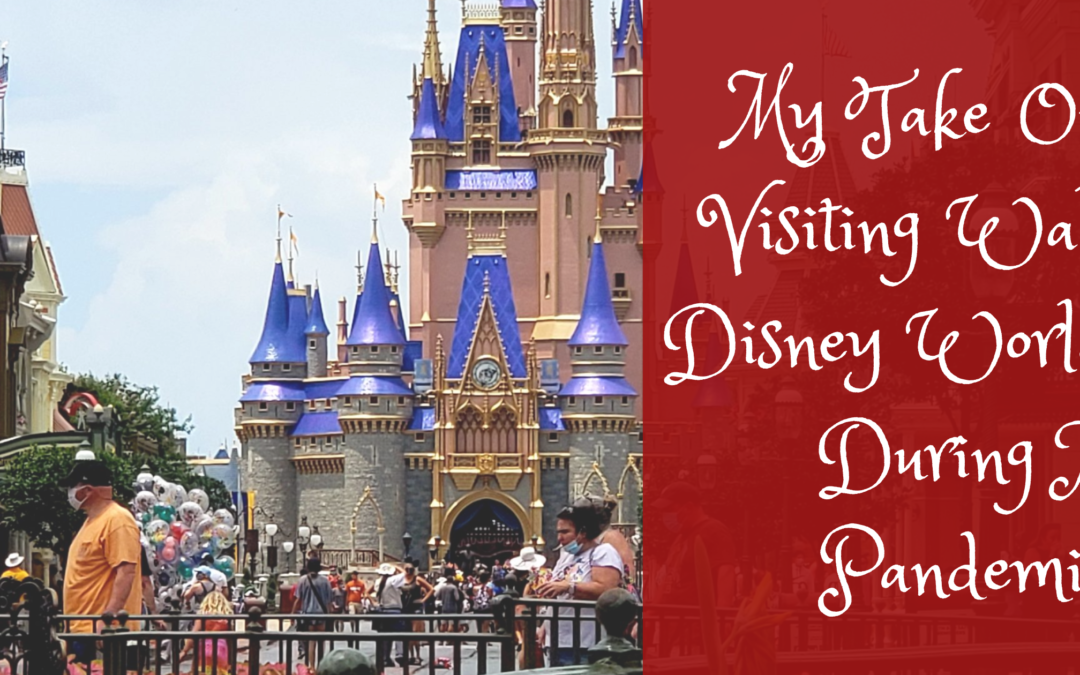 Before I start, I want to say; this is my personal opinion, the owner of Ears of Experience, on the re-opening weekend at Walt Disney World® Resort where I visited the Magic Kingdom Saturday and Animal Kingdom Sunday.

I was very hesitant about attending. I pictured myself in a hazmat suit, running in for 30 minutes and then bugging out. We ended up staying until late afternoon on Saturday! Friday when we first arrived at the Contemporary the day before Magic Kingdom opened, it was not your typical “Welcome Home”. The lobby was quiet, and you are encouraged to use online check in to avoid as much contact as possible. Call me old school, but I have never liked the convenience of this option. There is something about personally checking in at a desk that makes you feel like the vacation has begun, regardless of where you are travelling. But times have changed, and this is just one way to keep everyone safer. I am grateful for that. One person did welcome us while socially distancing and asked if we needed anything, knew where we were going, etc. This happened a few times while walking through the property.

As we entered the room, you could tell it was extra clean. I could almost feel the care that had been given. I never felt uncertain in the room. The remote control was wrapped in a plastic cover, there was signage about what had been done to prepare for our arrival, and other thoughtful touches.

We went to the Wave Bar, and the bartender was so excited to see us as well as the other guests sitting at the bar, he gave us glasses of champagne to celebrate. Everyone was very social distanced, and you could see the smiles in eyes even behind the face masks.

We ate at both Wine Bar George in Disney Springs and California Grill. Both were terrific experiences! Safe but still with the level of service we have come to expect when visiting these restaurants. Disney Springs was easy. You walked up, got your temperature scanned and off you went. Everyone was wearing face masks until they sat down, many until they ordered. Wine Bar George gave you a paper bag to put your mask in while you dined. There was a lot of energy, and they told us they were at full capacity. You would never have known it. The tables were spread out! When we left Wine Bar George, Disney Springs was empty, and most stores were closed. That felt odd as it was 9:45.

The next night we went up to California Grill and sat at the bar with our favorite bartender at Walt Disney World, Ray. It was so good to see friendly faces, and again, you could see the smile behind the masks. The food was as usual, amazing and the only difference we noticed was their wine list was shorter but they told us they could go to the cellar and get anything, not on the current menu.

As far as opening day at Magic Kingdom, it was magical in its own way, weird in other ways. To see all the cast members excited and cheering us on as we walked in was pretty amazing.

I got emotional. There were pop up cavalcades and character appearances here and there throughout the parks. My suggestion to guests is to mix rides and hunts for magic in the morning. The characters on the train station and the cavalcades die down as the afternoon kicks in. We were more focused on the rides in the morning and thought we would catch some magic later. That did not happen. I checked with guest services, and she said they don’t tell them when they are scheduled as they do not want crowds appearing. But she did say the pattern has been more in the morning, less in the afternoon. The train station appearances and the ones on the back of the castle lasted about 4 to 6 minutes. They said was to avoid crowds. My favorite was the stepsisters on the castle. They were very interactive and personable.

The queues in the lines at both Magic Kingdom and Animal Kingdom were thought through very well. Where they could, there was plexiglass in areas where guests had to pass each other and wait. Where they could not do that or it made more sense, they had long pass-throughs where you could not stand. The biggest use of the pass-throughs we saw was Pirates of the Caribbean, Jungle Cruise, and Flight of Passage. The wait times themselves were virtually non-existent. We could walk through a queue in many circumstances and ride over and over. Where we did wait, it was no more than 20 minutes. One of those times was on Flight of Passage. Much of that wait was people taking selfies with the Avatar in the tank. They have sanitizer as you enter the queue when you are about to get on the ride, and then after you get off as you exit the queue. I didn’t feel the need to pull out sanitizer or wipes.

The attractions themselves are socially distanced. Many use the front and back rows of ride vehicles. We saw this on rides like Seven Dwarfs Mine Train, Space Mountain, Big Thunder. Others used Plexiglas or a clear shield between roses and seating. This happened on Jungle Cruise and The Kilimanjaro Safari. Flight of Passage used new circles for the whole party and then divided you up once you enter to get on the ride vehicles. We had two bikes between the next travel party and us. The only place we saw any issues were exiting attractions. It would be very easy to jam up against each other. This was most noticeable on Flight of Passage as you exit, and the different levels merge at the stairs. I would think they would realize this and may have already rectified it.

The stores did a good job of keeping folks social distanced except for the Emporium on Main Street and World of Disney at Disney Springs. We did not shop at Disney Springs, but we heard this from one of our team members who was there that weekend.

My takeaways are I felt safe. Safer than in my town, running errands or at the beach town, we visited last month. Disney is doing a great job at “enforcing” the rule if you are moving, the mask is on. You have to sit if you are taking a mask off to drink, eat or just need a break. People were still having fun, and there NO LINES. Was it hot? Sure, it is July in central Florida, but we did find masks that were better than others. We will have another blog on tips and tricks. But we do not suggest the ones Disney sells. We found the Athleta ones that come in a five pack worked the best. Did they get sweaty midday? Of course, but we brought a spare, and we used the relaxation stations. There are three in most parks, and each park has one that is air-conditioned.

There are a few things I would like to stay after we get through the pandemic and it is not the lack of crowds. It thinks some crowds’ levels create the energy that is lacking right now. I like the theme park reservation system. I think it helps with crowd management giving everyone a better experience in the parks. I do like to park hop, so it will be interesting how they possibly incorporate that into this system. I like only allowing those with a mobile order ready to enter a quick-service restaurant. This made things so much more enjoyable and there were spaces for everyone to sit and eat. I also like the chat feature on the app to ask questions. I will do a separate post on character dining, but I like the way they ran things at Topolino’s. Although they can no longer go to every table for pictures and autographs, they did a fantastic job with character to guest interaction from a distance and let the kids know they are communicating directly to them. They came around twice on each rotation so there were plenty of opportunities to take pictures, and we saw them multiple times. This made the dining experience shorter; I do feel the old way makes a meal drag on far too long.

In closing, is it safe to go? That is a personal decision every person has to make for their travel party. I felt very safe and would go back this week but not everyone feels as I do. I also drove and stayed at the Contemporary, so I could walk to Magic Kingdom and drove to Animal Kingdom. Would I suggest to go now for your first trip? That is tough, probably not if you have little kids who might thrive on all the one on one character interactions. If you love all the attractions, yes if you feel safe. If you are a Disney lover and feel safe enough to go, this might be a good time to go. It is a once in a lifetime (man I hope) to experience Disney like this. I do not regret one bit going.

I hope this gives you a glimpse into one person’s experience, one who was very hesitant in going.